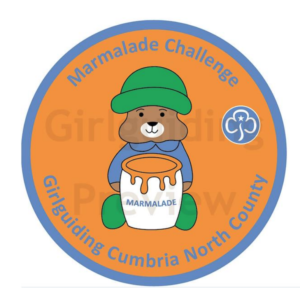 We are delighted to announce that Girlguiding Cumbria North have launched a new Marmalade Challenge Pack to help raise funds for Hospice at Home, as part of the 2021 Marmalade Awards!

The group have been involved with the Marmalade Festival since its inception and decided that as they would not be able to contribute in the normal way this year, they still wanted to support the charities that benefit from the festival. They have therefore designed a Marmalade-themed activity pack and badge, which can be enjoyed by children of all ages and is available to download HERE.

County Commissioner Ann-Marie Steel says “Over the years the Marmalade Festival has been a firm fixture on our calendar and we wanted to be able to continue that support.  Our team have devised a brilliant challenge pack which means our members can still be part of the festival – albeit virtually – and we can help contribute to the fundraising too.”

Piloted by Rainbows, Brownies, Guides, and Rangers across Cumbria North, the pack has been designed to be adaptable for children and adults everywhere.  Funds raised from the sale of badges and downloaded packs will go to the Marmalade Festival which in turn supports Hospice at Home.

Jane Hasell McCosh, founder of the Marmalade Festival, said “We’re really pleased that Girlguiding in this area is able to continue to support us even in these difficult times.  I’m delighted with the challenge pack initiative because I’ve always wanted to have a marmalade badge!”.

The challenge pack has been split into four sections – marmalade, bears, orange and good turns. We hope children around the world will enjoy taking part.

Girlguiding Cumbria North is part of Girlguiding, the leading charity for girls and young women in the UK. Thanks to the dedication and support of over 438 amazing volunteers, 1368 girls and young women in north Cumbria have space where they can be themselves, have fun, build brilliant friendships, gain valuable life skills and make a positive difference to their lives and their communities.  For more information and to join, see https://www.girlguiding.org.uk/